Aaron ran his first marathon back in 2007. He’s been testing limits since the start; this marathon was actually part of Ironman Florida in Panama City. “I am not really sure what I was thinking at that time but it all worked out. I guess not knowing what a stand-alone marathon felt like helped me with the Ironman training,” said Aaron. After running his first marathon, Aaron heard about a group of marathoners trying to complete marathons in all 50 states, and he decided to join. 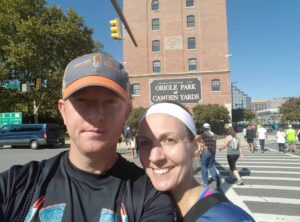 Aaron doesn’t just visit these states to run a marathon, he also enjoys bringing his wife and kids with him to travel and see new parts of the country. He likes to choose marathons that showcase a part of each state that interests him, and his family tags along to travel and even sometimes participate. His kids have participated in kids marathons and fun runs, and his wife will be running the Amica Newport Half Marathon while they are in Rhode Island,

As a fireman from Indianapolis, Aaron works hard to balance his training and travel with his job. “My time on the job and work rotation makes it a challenge to run these because we work every 3rd day, 24-hour shifts. If I can’t get a vacation day for a state then I have to trade time. So there is a balance between what days I can get off to travel for family vacations, family events, sporting events and days off to run a state,” he said.

This 50 state challenge is important to Aaron because it allows him to set a good example for his children, ages 7 and 9. “It’s important for me to do this challenge to show my kids the value of traveling, the value of health and taking care of your body, appreciating the gift of health and to spend time with them and my wife seeing places we probably wouldn’t visit,” he said. Aaron has plans to run the Marine Corps Marathon in the future but wants to wait until his children are older so they can travel to D.C. and be old enough to understand and appreciate the history.

After his doubleheader weekend, Aaron has plans to run the Route 66 Marathon in November and the Myrtle Beach Marathon in March 2020. Good luck Aaron!