Father-Son duo Tim & Steve began running when Tim was young, with 5K races. This Fall, they’ll be taking on the Amica Newport Half Marathon side-by-side. We caught up with them about their running journey, together.

The first few races they ran were tough. It took Tim some time to adjust to running and learn about keeping a steady pace to avoid burning out halfway through, but that never stopped him from signing up for the next race. “A 5K felt like 100 miles long back then. So it felt like a huge achievement to finish each one no matter if I felt good or not. Usually not. But I always wanted to run another.” he said.

“After a few races, not wanting to look like one of those crazy parents that makes their kid do something they didn’t want to do, I waited till we finished the race and he was on the verge of vomiting to ask if he wanted to run another race the next week and the answer was always yes….and so it started,” said Steve.

The two began to get into a routine of yearly races around Connecticut and eventually expanding to Cape Cod. They really enjoyed becoming a part of the running community, seeing the same people at certain races, and the excitement in the air. 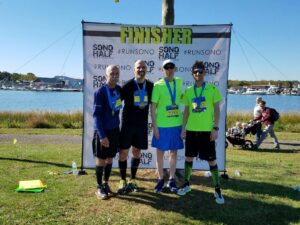 The first race that Tim really trained for was a 10K in Chatham. He and his dad would wake up at 5:30 am to go to the gym and run. In 2012, the two decided to sign up for a half marathon. Their first half marathon experience was not perfect. They learned that having enough time to train was important, and learned what exactly others meant when talking about hitting a wall. “The first half was where I learned the term “hit the wall” for running…..it was so bad that at the 8-mile marker I threw my headphones to the curb because I couldn’t carry that additional weight anymore,” said Tim.

Tim and Steve both agree that if you’re going to travel for a race, it should be a long enough race that it’s worth traveling for, and the place you’re going to should be somewhere you want to visit, and the Amica Newport Half Marathon is perfect for that. “The Half Marathon is the Rock Star event and Newport is a town that has always known how to throw a party,” said Tim. Their family has visited Newport many times throughout the years, so the two are excited to visit again. They also ran the Amica Newport Half Marathon in 2018, but Steve had come down with the flu right before running, and neither of them did as well as they had liked to.

This year, Tim and Steve have plans to not only redeem themselves from last year but also have plans to earn a new lifetime PR. “We are both looking to run a life PR as now is as good of a time as any. No one is getting younger or faster, although trying for both!” Tim said. Good luck, and we will see you two in October!