Why I’m Running the Amica Newport Half Marathon: Allison Neves

Allison Neves decided to run the Amica Newport Half Marathon after her friend suggested they sign up to run together. In the beginning, she planned only to run for the sake of the race but later chose to make her half marathon experience extra meaningful by fundraising for Samaritans, a charity focused on suicide prevention. “Initially I just signed up to run, and then I thought what a great platform [it was] for me to fundraise and try to raise money for such an important charity,” said Allison. 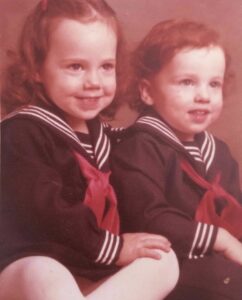 “Since we were just a year apart and close in size, my mom would sometimes dress us alike and people would often think we were twins,” says Allison of her brother, Derek.

She set a goal of raising $5,000 by the time of the race in October and is well on her way to exceeding it; with 4 months until race day, Allison has raised over $3,600 for Samaritans. Four years ago, Allison lost her brother, Derek, to suicide. Allison chose to fundraise for Samaritans in honor of him. She describes Derek as extremely intelligent, athletic, creative and witty.

When their father passed away in 2008, Allison noticed a change in Derek. He would have days where he was happy and others where he felt down. “I had suggested he seek help, but he never wanted to. I think he felt like he could correct things on his own. There’s also a stigma around mental health, and I believe he was too ashamed and probably scared to get help,” she said.

Things went on like this for years, through 2015 when Allison was pregnant with her daughter, Valentina. Allison knew that Derek had hit a low when he called her one night asking her to “make him feel better.” A few weeks later, things began to look up for Derek. “I felt like Derek had turned a corner. My mom had been to see him, and it seemed like things were looking up for him,” said Allison. Unfortunately, two days after Valentina was born, Derek took his own life and left the family in shock. “We are all left with so many questions. He was in such good spirits when I was in labor. He seemed like he really had a more positive outlook on things.”

Allison found Samaritans while searching for local charities and knew it was the perfect organization to run for. “When reflecting, I keep going back to the time he asked me to help him. I can’t help but think I failed him somehow. This is especially why I am passionate about increasing awareness so that there’s less of a stigma and people are more likely to reach out for and accept help. This campaign is to honor everyone in my family who has died by suicide, but in particular, I feel like I owe this to my brother.” Allison hopes to exceed her original fundraising goal of $5,000 by the time she runs the Amica Newport Half Marathon. To learn more about Allison’s story and to donate to her Crowdrise page, click here.