The following is a press release announcing the new partnership between Sebago Clean Waters and the Craft Brew Races!

Beer and running event series, the Craft Brew Races, returns to Maine for the Craft Brew Races Portland on August 8th, 2020. In a new partnership this year, a portion of every ticket sold to the event will be donated to Sebago Clean Waters. The event is produced by Gray Matter Marketing.

Sebago Lake is the second-largest lake in Maine and among the country’s only water sources with water clean enough for use as drinking water without filtration. The Sebago Clean Waters initiative works to protect this pristine resource—the water supply for one in six Mainers—by conserving the forestland that naturally filters the water.

“With water being the dominant ingredient in beer, it’s a clear connection that clean water sources are integral to the success and growth of the craft brewing industry,” says Matt Gray, President of Gray Matter Marketing. “This partnership with Sebago Clean Waters means the Craft Brew Races is supporting both the breweries resources as well as the health and well-being of Maine residents.” 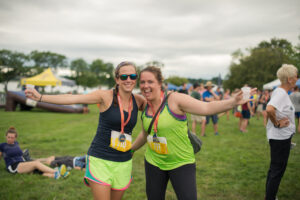 “We’re thrilled to join forces with Craft Brew Races Portland as a way of highlighting the importance of clean water, not only for high-quality beer but for a healthy lifestyle,” says Sebago Clean Waters Coordinator Karen Young. “We are truly lucky here in Maine to have some of the cleanest water in the world, and we aim to keep it that way by protecting the forests that filter the flow.”

The Craft Brew Races Portland course is 3.1 mile/5K run (or walk) around Edward Payson Park and the Back Cove. The run is timed, and prizes will be awarded to the top three males and females, as well as the fastest team, largest team, and largest brewery team. The beer festival will take place inside the park as well. The festival will feature local and regional craft breweries, as well as live music and food vendors. Designated driver and festival-only tickets are available.

“Clean water is at the heart of great beer,” says Heather Sanborn, co-owner at Rising Tide Brewing Company. “We’re blessed with some of the best drinking water in the world here in the Greater Portland area, which means we can make some of the best beers in the world. Sebago Clean Waters is working to protect our watershed from future development pressures that could threaten our clean water. We’re grateful that Craft Brew Races is supporting them through this year’s race.”

The Craft Brew Races 5K starts at noon, with the festival doors opening at 12:30PM. All 5K participants and festivalgoers receive a pint glass and entry to the festival — including all beer sampling, live music, vendors and food trucks selling onsite. All designated driver ticketholders receive a different bracelet at registration, and are welcome to enjoy the festival, designated snacks, and non-alcoholic beverages. The Craft Brew Races proudly purchases all the festival beer from the breweries in order to support the Maine brewing industry.

The full beer lineup, as well as additional details, are available at www.craftbrewraces.com/portland. Military discounts are also available. Interested breweries and vendors are invited to contact Craft Brew Races and Gray Matter Marketing at [email protected]