Kicking Off July at the Portland Craft Brew Races

What better way to start July, and the celebration of an extended Independence Day weekend, than with a fantastic Craft Brew Race event in Portland, Maine?!

More than 1,000 runners toed the start line in Edward Payson Park on Saturday morning. Despite a threatening forecast, it turned in to a beautiful summer day as runners followed a loop course around Back Cove for 3.1 miles, finishing just steps from the beer festival.

Cam Regan (Cumberland, ME) was the overall 5K winner, running the 3.1-mile course in 18 minutes and 47 seconds. Regan spent the morning volunteering for Craft Brew Races as a registration and check-in helper, which also earned him a complimentary post-race festival entry. “The course here is absolutely beautiful,” said Regan. “Running around Back Cove, you can see where you are along the course the entire time, it makes it really interesting.” Erik Funk, from South Boston, MA came in second, and Andrew Lamberth from Cape Elizabeth, Maine rounded out the men’s podium. 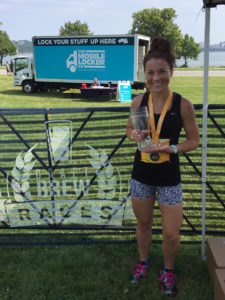 Not far behind, another local runner, Megan Hamilton, placed first for the women, finishing the race in 21 minutes and 6 seconds. Hamilton, who is from Portland, said the race was a light-hearted competition with her fiancé, who was still on the course by the time Hamilton blazed into the finish. “Even though the run was really hot, I thought it was great,” said Hamilton. Laurie Gaudreau (York, ME) finished second, and Laura Getchell (Raymond, ME) finished third overall for the women.

Breweries and groups of friends are encouraged to organize as a team in order to compete for prizes for largest and fastest team (based on the top three finishers, including one male and one female). A group of friends who dubbed their team name “The Young and the Breathless,” won the fastest non-brewery team award, while SoMe Brewing (York, ME) won the fastest brewery team. Rising Tide Brewery (Portland, ME) won the prize for largest team, with 46 team members participating in the 5K race.

46 breweries, including 25 from Maine, served samples of beer to participants and festival-goers for 3.5 hours immediately following the race. The sunny summer day made for a hot, but enjoyable festival for both vendors and attendees. As the event’s charitable partner, $3,000 was donated to the Maine Brewer’s Guild.

The Craft Brew Races will return to Portland in 2018; the date will be announced on www.craftbrewraces.com as soon as possible.

The 2017 Craft Brew Race series continues on July 22 in Newport, Rhode Island and then New Haven, Connecticut on August 5.