While many Rhode Islanders remained cozy in their beds on Sunday morning, more than 2,600 runners and walkers crossed the Claiborne Pell Bridge on foot during the eighth annual Citizens Bank Pell Bridge Run. All of the proceeds from this local-favorite event are donated to non-profits, and participants are encouraged to fundraise on their own as well; this year, the event raised more than $160,000 for charity.

Despite the chilly, wet weather that seems to have become typical in Rhode Island this October, runners and walkers were all smiles as they completed the 4-mile course. The run/walk, which starts in Jamestown and brings participants over the Pell Bridge and into Newport, still boasted its signature, stunning views of Aquidneck Island and Narragansett Bay. The Citizens Bank Pell Bridge Run is the only day of the year pedestrians are permitted on the bridge. The event hosted by the Rhode Island Turnpike and Bridge Authority Foundation and is produced by Gray Matter Marketing. 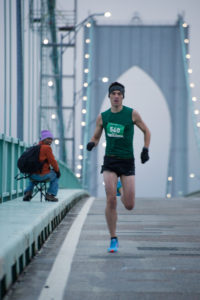 Geoff Nelson, from Providence, Rhode Island, won the 2018 race with a finish time of 21:19. Nelson, a Citizens Bank employee, has run the Citizens Bank Pell Bridge Run for seven consecutive years — and he has won every time. “It was lucky number seven this year,” said Nelson after his win. “This was a tough one, we’ve lucked out each year with the weather, but this year was challenging. But, there will still so many runners out there and it really is a great event.”

Nelson was more than a minute ahead of the second place finisher in the end but had some competition on the bridge. “There were a couple of little guys with me for the first few hundred yards,” said Nelson with a smile. “I remember being the little kid that would be the one who would always sprint out to the front. It’s cool that whole families run and walk this event together.”

Graeme Clougher, from Newport, Rhode Island finished in 22:21, followed by Brett Musco from Cambridge, Massachusetts in 22:27.

Megan O’Kelly, a 16-year-old West Warwick High School cross country runner, took the top spot on the women’s podium, blazing across the finish line in just 25:15. “My mom always wanted to do this race, and my whole family is walking it, so I decided to just go for it,” said O’Kelly. “The downhill helped a lot with the tougher conditions. It’s smooth sailing once you get to the top. I hope to come back for another year.”

Courtney Koehler, from Newport, Rhode Island finished second overall for the women at 26:07, and the women’s podium was rounded out by Sutton, Massachusetts’ Jaqueline Shakar in 26:43.

Finishers ranged in age from Liam Hager, a 5-year-old from Newport, Rhode Island, to 82-year-old Gail Healy, from Springfield, Massachusetts. Teams from local and regional nonprofits and running clubs came out in force in matching jerseys and costumes. 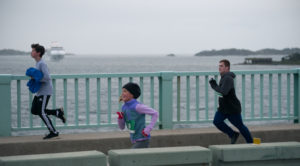 Members of the Newport Fire Department — Lt. Aaron Buehler, FF Evan Katz, FF Eddie Valen, FF Keith Nicodemus, FF Ryan Maloney, FF Mike Marotta, and FF Marcus Cochran — ran the race in full gear,  some including their oxygen tanks, as members of the International Association of Firefighters and the organization’s support of the Muscular Dystrophy Association. “It was a great day,” said Eddie Valen. “There was a great sense of community, great pride in serving Newport, and it was great to continue on in the tradition of helping others in need.”

For a full list of supported non-profits, results, and photos, visit www.pellbridgerun.com. A date for the 2019 Citizens Bank Pell Bridge Run will be on October 20th, 2019. Registration information will be published soon!