While many Rhode Islanders remained cozy in their beds on Sunday morning, more than 3,100 runners and walkers crossed the Claiborne Pell Bridge on foot during the ninth annual Citizens Bank Pell Bridge Run. All of the proceeds from this local-favorite event are donated to non-profits, and participants are encouraged to fundraise on their own as well. While final numbers are still being tallied, the total will be well north of $100,000 in charitable contributions.

Buoyed by a gorgeous sunrise and mild temperatures, runners and walkers were all smiles as they completed the 4-mile course. The run/walk, which starts in Jamestown and brings participants over the Pell Bridge and into Newport, boasted its signature, stunning views of Aquidneck Island and Narragansett Bay. The Citizens Bank Pell Bridge Run is the only day of the year pedestrians are permitted on the bridge. The event hosted by the Rhode Island Turnpike and Bridge Authority Foundation and is produced by Gray Matter Marketing. 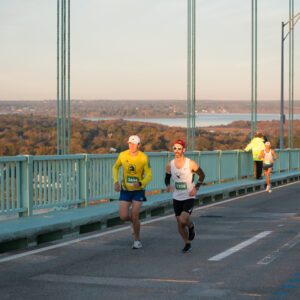 Chris Garvin, from Kingston, RI won the race in a speedy 20 minutes and 13 seconds. “I can’t imagine a better day for this race, it was unbelievably beautiful,” said Garvin after his finish. “I ran the race for Clean Ocean Access, a really great organization, and I’m proud to be representing them today.”

Kelley MaGill from North Kingstown, RI broke the tape for the women in 24:35. Katharine Rosenfeld, from Westport, MA was second overall for the women at 26:07, and the women’s podium was rounded out by Sutton, Massachusetts’ Jaqueline Shakar in 26:15.

Finishers ranged in age from 5-year-old Pearl Baker, to 86-year-old Francis Taylor. Teams from local and regional nonprofits and running clubs came out in force in matching jerseys and costumes.

For a full list of supported non-profits, results, and photos, visit www.pellbridgerun.com. A date for the 2020 Citizens Bank Pell Bridge Run will be announced soon.