Megan O’Kelly, from West Warwick, Rhode Island was the overall female winner of the 2018 Citizens Bank Pell Bridge Run, covering the 4-mile course in just 25:17! Megan checks in with us to share her thoughts about the race, running, and reading:

This was your first year running the Citizens Bank Pell Bridge Run, what did you think?

I definitely enjoyed running across the bridge, I have lived in Rhode Island my whole life and gone over the bridge hundreds of times by car to visit family in Middletown and Newport, but running across it was a totally new and exciting experience. Unfortunately, the weather was not ideal during the race this past year; nonetheless it awesome to look out at the water and all the sights of Newport Harbor on foot. 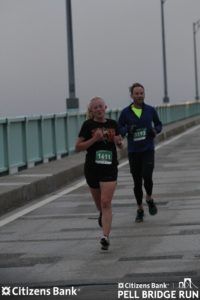 How did your family react when you told them you won the race?

My mom, dad, my brother and his girlfriend were all running the race, but went off in the second and third waves of the run. When I told them I won, they were all pretty shocked because it seemed unlikely that I would win a race of this magnitude. With that being said, they were excited that I did because I have been running for the past six years of high school and middle school and all the hard work that I have put in is slowly becoming worthwhile.

You’re 16 years old, and run for your school in West Warwick. What do you love about running on the Cross Country Team?

I run year round for the Cross Country and Track teams at my school, but there is something special about the Cross Country team because they are truly my second family. Though other schools draw a large number of athletes for cross country we struggle to find 15 kids to run and this past season we only had 4 girls including myself. While this does not bode well for a competitive season, it does mean that you can get to know everyone on the team at a personal level. I love the fact that cross country is my favorite thing, distance running to clear my head, with my best friends.

Before race day, or meet day, what does your prep routine look like?

My race preparation starts with eating pasta and some sort of protein, the night before to serve as carbo-loading and I make sure to suppress my sweet tooth a few days before a big run. In the morning, for an early race like the Citizens Bank Pell Bridge Run, I eat 3 or 4 glucose gummies to keep my head clear during the run, but for a later race where I have 3 to 4 hours for digestion, I like to eat Honey Nut Cheerios. I usually start warming up 45 minutes to an hour before the beginning of a race. I go for a ½ mile jog, then do a series of static stretches, put on icy-hot and roll my legs out, and finally, I do dynamic stretches.

What book or movie you’ve read/seen recently you would recommend and why?

Most recently I read a book called Into Thin Air by Jon Krakauer which discusses the struggle that summiting Everest truly is and how quickly information is lost as well as how quickly things can go wrong at high altitudes. I love reading the adventures of mountaineering climbing, though it takes a certain type of person to feel invigorated by risky and physically demanding situations.